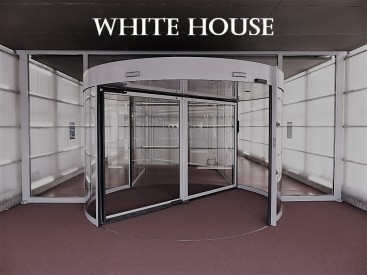 What the heck is going on in the Trump Regime? It seems like we need to have a revolving door installed at the White House since every day it seems like someone is leaving. On Friday, another person accused of being physically abusive to an ex-wife resigned. When the allegations came out, David Sorensen a speechwriter who worked under senior policy adviser Stephen Miller handed in his resignation, denied being abusive to his former wife and said he was the one who was victimized, yet it is she that has the scars that tells the story.

It seems to me that Trump is trying to turn the White House into the hangout of the “good ole boys,” who don’t give a crap about the women. When Trump spoke about the allegations against Rob Porter the man accused of abuse by his two ex-wives he said, “I found out about it recently and I was surprised by it, we certainly wish him well. It’s obviously a very tough time for him. He did a very good job while he was in the White House.”

“We hope that he will have a wonderful career,” Trump added.

Trump said, “it was very sad when we heard about it. He says he’s innocent, and I think you have to remember that. He said very strongly yesterday that he’s innocent, but you’ll have to talk to him about that.”

Did you notice that Trump never once mentioned the women? I noticed. I think that Trump doesn’t give a damn about women. Women are to be used, abused and thrown away. If he manages to keep a woman (any of his 3 wives) he can’t be faithful. We all know people like him. It doesn’t matter if it’s a man or a woman we all know someone like him Most of us keep people like Trump at bay, but sometimes they catch a person and convince them that they are an amazing person and they just string the person along while they cheat and lie.

Rob Porter’s second ex-wife warned “that she doesn’t think he has changed since the end of their marriage and warned his current girlfriend, White House Communications Director Hope Hicks, that if he hasn’t already been abusive with Hope, he will be.” How are two people working in the White House allowed to date, especially since Porter never had permanent security clearance. What was he seeing because he was dating Hope Hicks? This White House is all kinds of messed up.

On Saturday, Trump continued to only worry about the men and taking on the #metoo movement wit this tweet: 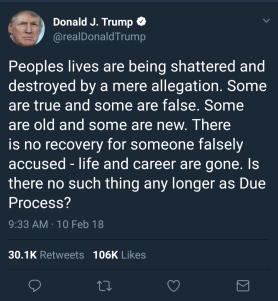 I think he believes that the men who worked in his administration are not guilty of abuse. Why would he even really care? Ivana Trump, accused Trump of raping her in a court deposition. In the book Lost Tycoon by Harry Hurt lll, it details the allegations “violent assault,” in which Trump pulled out fistfuls of his ex-wife’s hair after receiving a painful operation on his scalp.

“He jams his penis inside her for the first time in more than sixteen months,” Hurt wrote. “Ivana is terrified.… According to versions she repeats to some of her closest confidants, ‘he raped me.’”

According to the New York Times, Trump’s lawyers insisted she write the following statement at the beginning over her book, “During a deposition given by me in connection with my matrimonial case, I stated that my husband had raped me. I referred to this as a ‘rape,’ but I do not want my words to be interpreted in a literal or criminal sense.”

Donald Trump has tried to fill the White House with men who are just like him. How many women have come forward with allegations against him? I believe the count is 19 so far and I can’t understand this man seems to shake the allegations off and nothing sticks. He brought Steve Bannon into the Regime and was charged in 1996 with domestic violence, battery and dissuading a witness. Trump referred to Bannon as Bam Bam because of the allegations. (I find that utterly repulsive, but it shows you exactly how Trump thinks)

Cory Lewandowski, Trump regime campaign manager had been charged with one count of misdemeanor battery when he grabbed reporter Michelle Fields when she tried to get close enough to Trump after a news conference in Florida. The prosecutor decided not to move forward with the case. Trump spoke with the prosecutor, saying that Michelle Fields touched him, and he urged him “to do the right thing.”

I wasn’t joking when I said Trump is trying to turn the White House in to “good ole boys” hangout.

Trumps initial pick for Secretary of Labor was Andrew Puzder, who was accused of assault and battery of his ex-wife in papers of their divorce in 1989. She accused that he hit her violently about her chest, back, shoulders and neck. She talked about her experience on the Oprah Winfrey show and said Puzder told her, ““I will see you in the gutter. This will never be over. You will pay for this.” She withdrew her accusation after Puzder was nominated by Trump. However, Puzder withdrew his name from the consideration.

Also, on Friday, Rachel Brand who was the third ranking official in the Justice Department is resigning. Brand also worked for George W. Bush and Barack Obama administration. According to Walmart, she will be taking a position as Executive Vice President, Global Governance and Corporate Secretary. A friend of Brand says this is a “once in a life time job.”

To me, it is still suspicious to me that she is leaving during all the chaos at the Department of Justice. She reported to Deputy Attorney General Rod Rosenstein who oversees the Special Counsel Robert Mueller investigation. In recent weeks that has been talk of Trump firing Rosenstein and then Rachel Brand would have stepped into overseeing the Mueller investigation. I think she is jumping ship before all hell breaks loose. I have a feeling there is more going on that we are not aware of. I think Trump is trying very hard to get out from under the investigation and he will ax anyone in his way, but we will have to wait and see.

I do know that we need to be ready to hit the streets in protest if Trump decides to fire Robert Mueller. There are plans in place to be involved in peaceful protests. Please check the links below for groups in your area. I have made the pledge to protest peacefully, please join me, because no one and I mean no one including Trump is above the law.

FIND A “NOBODY’S ABOVE THE LAW” PLAN OF ACTION HERE