Today, for the first time instead of trying to sit through Sarah Huckabee Sanders’ (SHS) press briefing (Which you can find HERE) I printed out the transcript and read it. It is so much easier to read than it is to sit and listen to her demean the press who are just trying to do their job. I do miss press secretaries that chose to do their job with a bit of decorum.

It had been a week since the last press briefing which had been stopped due to the shooting in Parkland, Florida. I am not sure why they decided to stop the briefings, but they did. As I mentioned in yesterday’s post a White House official said the mass shooting in Parkland gave the White House a reprieve of bad press, so maybe they used their reprieve to take a mini vacation from press briefings. It wouldn’t shock me one bit if the press briefings ended and we never heard another word from SHS.

The briefing today was an hour and a half late starting and even though there were many questions to be asked SHS kept the briefing to twenty minutes.

SHS started the briefing talking about the heroes of the shooting and spoke about the parents, teachers, and students invited to the White House for a listening session to ensure safety at our schools. In attendance will be people impacted by Parkland, Columbine and Sandy Hook tragedies.  On Thursday the White House will be hosting local officials, including members of law enforcement to carry on the conversation.

The first question asked was, “Does the President now acknowledge what the Special Counsel indictments made clear, which is Russians not only tried to meddle but interfere and influence the 2016 election?”

SHS replied that the president has acknowledged it many times before. She said he acknowledged it during the transition, during a press conference in Poland and a third time at a press event in Poland.

This is a lie!! Trump has called the whole Russia thing a “hoax” multiple times. He has not once ever said one thing about his pal Vlad. He has never criticized Russia. 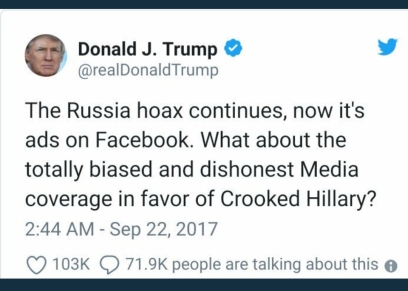 SHS continues with an insult to the press, “He has stated several times – I think one of the places where you guys seem to get very confused, and it seems to happen regularly – the President hasn’t said that Russia didn’t meddle. What he is saying is it didn’t have an impact, and it certainly wasn’t with the help from the Trump campaign.”

She then just repeats herself saying “It’s very clear that Russia meddled in the election,” and then more about it not impacting the election and the campaign wasn’t involved.

The next question asked, “Sarah if that’s the case, why hasn’t the President implement the sanctions with Congress passed last year?”

At this point, this big fat lie made me laugh out loud. My neighbors may think a crazy cat lady lives next to them. It may be true. But seriously, how does Sarah Huckabee Sanders stand up there day after day and lie to the American people? I thought the press secretary was supposed to honest with the press and to us, but she stands up there and tells bald face lies to us. This woman has kids and has a job where she tells nothing but lies. How will her children learn to know lies from the truth? When her kids lie to her in the future, she only has the Trump administration and ultimately herself to blame.

The question was repeated, “But he hasn’t implemented the sanctions, has he?”

SHS then goes for the whopper. I’m going to direct quote this for you.

SHS: “Well, there’s a process that has to take place, and we’re going through that process. That law also says that the countries have to violate something in order for those sanctions to go in place. And that hasn’t necessarily happened.”

In my head, I shouted “WHAT?” So does that mean the Russia meddling in our election violated nothing? That to mess with our elections is fine? She just sent the message around the globe that it’s fine by us if you want to screw with our elections. The next thing you know, Trump will be sending out instructions on how you can screw with our country. These people in control of our country make me see red! You cannot make this stuff up. If I tried to use this in a book plot people would tell me this isn’t possible.

SHS says the President has been tougher on Russia than former President Obama. She says the president helped push through $700 billion dollars to rebuild our military, he helped export energy to Eastern Europe and closed three diplomatic properties that were Russia’s here in the United States.

And there we have another lie. The three diplomatic properties that were closed were done by former President Obama. He also implemented sanctions, which Trump seems to not want to do. It might hurt the feelings of his BFF Vlad. (BFF = best friend forever)

There is much more to the press briefing, but I will stop there. If you want to read the brief yourself, (CLICK HERE)

The man in the White House took an oath of office when he became president. “I do solemnly swear (or affirm) that I will faithfully execute the Office of President of the United States, and will to the best of my Ability, preserve, protect and defend the Constitution of the United States.”

Has Donald Trump even tried to uphold his oath? If he did, wouldn’t he want to implement the sanctions against Russia? It is like he is protecting Putin and Russia instead of the United States and the American citizens. I cannot understand how Donald Trump has one supporter left. How can you support him after he refuses to do the job he supposedly wanted? The more I read the book  Fire and Fury by Michael Wolff, (CLICK HERE TO BUY)  the more I see that Donald didn’t want this job, Russia wanted it for him, so they gave him this job. There are plans by Putin to mess with the elections in November of this year and with Trump not caring about it I fear he will mess with us again. I firmly believe that we need to go back to old-fashioned paper ballots, because if it isn’t electronic, Putin can’t mess with it.

Here in Texas, primary voting started today and I plan on voting tomorrow. Please if you live in Texas go out and vote tomorrow. Let’s make it so that polls have to stay open late. Let’s do this! If you live outside the state of Texas, please get in touch with your local courthouse. Find out when you have to vote. Make sure you are registered and if you aren’t, get yourself registered. We need to take our country back.

There is so much more I want to write about tonight, but this is already getting too long and tomorrow is another day.

If you like what Mawow and I are doing here, please consider becoming a patron. CLICK HERE to check out our Patreon page. (Thanks)

One thought on “LIAR, LIAR PANTS ON FIRE”