Tuesday, White House Chief of Staff, John Kelly downgraded Jared Kushner’s security clearance to “secret,” which is the same security clearance that White House butlers and kitchen staff have. The Democrats have been asking for the security clearances of Jared Kushner and Ivanka to be revoked since hearing of them using personal email accounts (hypocrites) and the multiple revisions to his SF-86 questionnaire. He initially failed to include meeting with foreign officials. (There were over 100 errors or omissions) (LINK) There has been no reporting of Ivanka losing her clearance, I wonder if Trump protected her from John Kelly?

I found it appalling that Jared Kushner was allowed to be in the room when Trump was getting his daily briefings and that he got his own briefings earlier in the morning. Kushner only had interim clearance and he shouldn’t have been anywhere near where the briefing was going on or getting his own briefing because he had been trying to set up backdoor communication with Russians during the Trump transition.

I have been giving thought to why Trump did not just give Ivanka and Jared the security clearances they needed to do the “job” they were “hired” to do. I think that Mueller is closing in on Jared Kushner and his connections to Russia. If he had given Kushner security clearance when it had been shown that it would never be available to him because of his business connections and troubles, that Trump would have been called on the carpet by Democrats and Mueller for giving Kushner access to even more top secret information that could be passed to the Russians.

We are living in very scary times. The man who happens to be in the White House was only put there with the help of the Russians. I believe that when Trump asked the Russians to hack Hillary Clinton’s emails he knew they already had the emails. I think when he did that, he was giving the wink, wink, nudge, nudge to his buddy Vlad.

During the campaign, Trump was trying to buy property in Russia (LINK) and his son Eric bragged to reporter James Dodson that they had access to $100 million dollars from Russia to build golf courses. He said that American banks were scared of loaning them money because of the decline in golf courses. (LINK) I don’t believe that for one minute. American banks were afraid to loan money to Donald Trump and family because of the many declared bankruptcies and the nasty habit of not paying money that is owed.

I think the pressure is getting to the president… 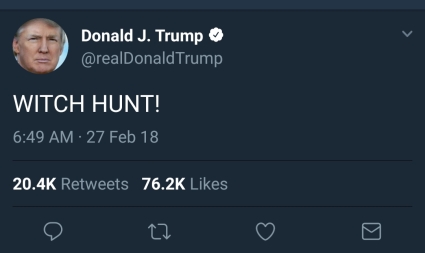 In Tuesday’s White House Press Briefing, Sarah Huckabee Sanders was asked if the president was doing anything to make sure Russia wouldn’t hack our elections.

I think Trump is going to let Russia do whatever they want to do and the GOP is along for the ride. There are so many Republicans that are not running for office again because they know that Trump got where he is with the help of his BFF Vlad and they will be complicit if the Russians meddle in the November elections. I believe that some of those who are retiring are decent people, but they are not willing to put their careers on the line for Trump so they are just leaving. I really wish some of them would stay and fight for what is right.

The National Security Agency Director Mike Rogers said Tuesday that the president has not given him direction to combat the Russian meddling. (LINK) Of course, Trump will not give him direction to do anything about Russia because that would mean he couldn’t go around hollering “the whole Russia thing is a hoax,” or “there was no collusion with Russia.” Trump will never admit that he had Putin help him become president. According to The Donald, he needs no help with anything since he is the greatest man to ever be president. Hell, I bet he would tell you he didn’t even need his wives to give birth and he could have done it all by himself since he is the greatest man to walk the earth, well at least to himself.

According to the top six intelligence agencies, the Russians will meddle with the November midterm elections.

I know I have said this many times before, but we are living in really scary times. When I talked to my mom last night, I asked her to think back to other presidents, congressmen, and senators where we had said they were so crooked, but compared to Trump, they were angels. Even Nixon comes off as a “not so bad guy” compared to Trump.

Trump seems happy to just hand our democracy to the Russian president. I am a hard time deciding if Trump is afraid of Putin and if Putin really does have tapes of Trump doing devious things or if Trump is just really a messed up person and gets off on screwing people over for the fun of it? Does he sit in his bedroom at the White House in an ugly robe eating cheeseburgers laughing that he is screwing over a bunch of people all at once? Or does he see himself as a peer of Putin and he his hurting Americans the way Putin treats his people?

All I know is that everyone who can vote needs to make sure they are registered, then get out and vote. We need all the help we can to get the MONSTER out of the White House. If you need help figuring out how to register or finding where to vote, please use the contact me tab and I will help you. I promise I don’t sell your email or give them to anyone. I just want to help this country and make it a safe place for everyone.

Sorry that I sort of went on a rant there toward the end, but I am passionate about my beliefs and I hope you will forgive my rant.

PS: If you made it this far, you deserve a treat. Here is a new picture of Mawow! He is my sweet little boy. He bring joy to our lives. ♥  If you like what Mawow and I are doing with our blog will you think about becoming a patron? Head on over to my Patreon and have a look around. I post more person and less political over there. (MY PATREON)