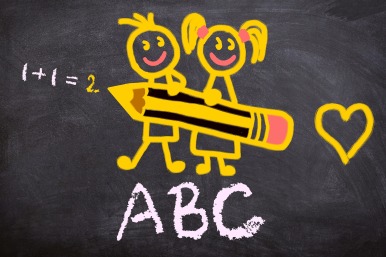 In 1979 President Jimmy Carter created the Education Department. The main function of the Department of Education is to establish policy for, administer and coordinate most federal assistance to education, collect data on US schools, and to enforce federal educational laws regarding privacy and civil rights.” The Department of Education does not establish schools or colleges. Does Betsy Devos even understand her job description? She needs to bone up on exactly what her job is, she is there to help schools out instead of defunding them and shuffling money to schools of her choice. She is secretary of education to all schools, not just charter schools.

Betsy Devos attended private school at Holland Christian High School and Calvin College. She graduated with a Bachelor of Arts Degree in business economics in 1979. She was raised in the church of Christian Reformed Church in North America and is an elder and member Mars Hill Bible Church in Grand Rapids. She never attended a public school and has only visited a handful of school, but she has not visited any schools that are doing poorly.

Printed in the Atlantic in 1987, Mrs. Devos was quoted, “My family is the largest single contributor of soft money to the national Republican Party. I have decided to stop taking offense at the suggestion that we are buying influence,” she wrote. “Now I simply concede the point. They are right.” She also stated in the op-ed, “We expect to foster a conservative governing philosophy consisting of limited government and respect for traditional American virtues…We expect a return on our investment; we expect a good and honest government. Furthermore, we expect the Republican Party to use the money to promote these policies and, yes, to win elections.”

Mrs. Devos was elected for 16 consecutive terms to serve as a local precinct delegate for the Michigan Republican Party. For the Bush re-election campaign in 2004, she personally raised over $150,000. George Bush attended a fundraiser in her home.

During the 2016 election, she called Donald Trump an “interloper” and “did not represent the Republican party.” She initially backed Jeb Bush and Carly Fiorina before supporting Marco Rubio, which makes me wonder what kind of return she is getting for being in the Trump administration. Does she have a grudge against the education in America? Does she want all schools to follow her religion? She has not visited schools that are doing poorly, so how is she basing her judgments about these schools?

During her confirmation hearing, she said that some schools may need to have guns because of the threat of grizzly bears. Now, she has another role appointed by the president, she is overseeing a commission on school safety. The White House has said it will begin helping states to provide “rigorous firearms training” to some teachers.

I still believe that arming teachers is a bad idea. How will teachers feel if a student is depressed enough to commit suicide by teacher instead of by cop? How many students will have to die before Devos stands up for kids instead of using them as a photo op?

Devos said she toured Marjory Stoneman Douglas High School with student journalists but the editor of the school newspaper tweeted this,

Betsy Devos has been the Secretary of Education for over thirteen months and she struggled through her “60 Minutes” interview. She was not able to answer basic questions about education. She spoke about charter schools in Florida to prove her point about charter schools and private school is should be where funding is spent, but she failed to tell Lesley Stahl that the state of Florida had given charter schools around $70 million dollars and that didn’t stop the schools from closing. Florida was not able to recover the money spent. (CLICK) 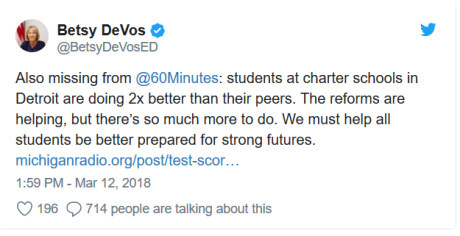 During her interview with Lesley Stahl, Devos said that schools that had lost funding to charter/private school ended up doing better. I am not sure how that is possible. If the school losing funding where does the money come for education tools in classrooms? Teachers already spending money for their classrooms out of their own pocket. Is she expecting teachers to pick up the slack? We are already asking too much of educators.

Devos wants to give parents the choice to take their children out of public schools and if they decide to move their child to a charter/private/parochial school, that funding would follow the child to the new school.

Devos is taking a page from Trump’s playbook by trying to overturn every Obama-era guidelines. She has taken away part of the government guidelines dealing with college campus sexual assault, by giving the power back to the schools more balanced rights for accused students. Which means that fewer men and women will report sexual assault because campus’ will go back to sweeping assault under the rug.

Seriously, why would roll back this guideline, except just roll it back because the Obama administration had something to do with it? She is just like Trump, she has spent her entire life buying whatever or whomever she wants and I think she bought her way into the Trump administration. How much do you think she paid for her position? Will Rober Mueller find a payment from Devos to the Trump campaign? (LINK)

This woman is detrimental to education. She should not be allowed to make any decision concerning any school. She is an “if you scratch my back, I’ll scratch your back” kind of person, so what is she getting out of this? She is already rich, so what does she get? I think she is disgusted by Donald Trump, but she is willing to get down in the mud with him. So what is she getting from him and what is she giving to Trump? It is a lot to think about, isn’t it?

CLICK HERE to check out mine and Maowo’s patreon.

One thought on “EDUCATION IN AMERICA”