Why did president Trump decide to call Vladimir Putin to congratulate him on his re-election? Allegedly there was widespread ballot box stuffing and videos have surfaced that clearly show ballot boxes being stuffed by people working at the polling places. If you do a search on YouTube, you will find a bunch of different videos to watch.

So, why did Trump call his buddy Putin to congratulate him on winning a fixed election? Also, why did the president ignore his security advisors? It seems to me like Trump is infatuated with Putin and wants to be a dictator like him or he owes Putin for something? What that might be, I do know. Maybe there really are tapes of Trump doing things that one shouldn’t do when they are in another country with a dictator who is notorious for taping people who visit his country. (I’m no longer going to talk about what Trump has done with women, he will have to come clean to his wife one day and I will applaud when she kicks him out or she leaves him in the dust where he belongs.) 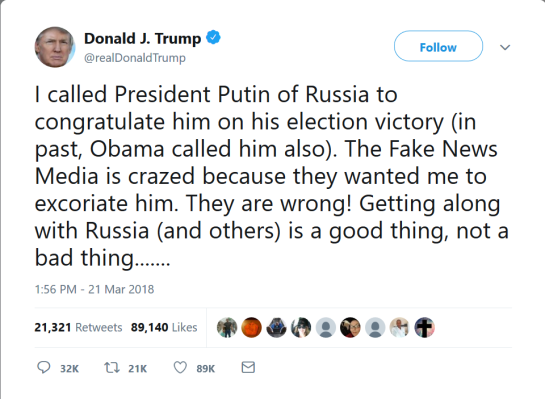 According to CNN Trump is furious about the leak concerning him ignoring the warning of his security advisors. (LINK) My mom and I were discussing who we thought would have leaked the information and I think maybe the leak came straight from Trump’s mouth or his fingers on that damn phone he tweets with.

In the book Fire and Fury, by Michael Wolff, (Click here to buy) he says that Trump likes to call people in the evening when he retires to his bedroom in the residence. He makes telephone calls to “friends” to brag about his latest insults and quips. So maybe he decided to tell one of his “friends” about defying the security advisors?

Another White House official said they are not sure that the president even read the note card that had the warning from Trump’s security advisors and also said that the president doesn’t often read the notes provided to him when he calls foreign leaders. (LINK) Which could mean that someone actually leaked the note cards and that would be a fireable offense, but I’m still going with Trump being the one who said something.

The telephone call to Putin was done in the residence with National Security Advisor H.R. McMaster present and Trump wasn’t due in the West Wing until noon. Do we know that the document with “DO NOT CONGRATULATE” written on it was removed from the residence after the call was finished? Was it left in the residence where Trump finally saw it and called someone to brag about defying McMaster? It has been all over the news lately about nobody beings sure if McMaster would have his job much longer, so maybe he was set up by Trump?

This is a lot of speculation on my part, but heck it’s fun to try to figure out the latest doings in the dumpster fire aka the Trump presidency.

There has been a new turn of events concerning the nerve agent used on the ex-Russian spy and his daughter. First Russians accused the UK of the nerve agent being used (LINK) and today Russia says it was the US. I am confused. Why would the UK or the US use this Russian linked nerve agent? I wonder how long it will be before Putin convinces Trump it was done by the UK or the US? If he convinces Trump it’s the UK doing this, we will lose an important ally. They already think the US is being run by an insane in the membrane president. And if Putin convinces Trump it was a person in the US, we will see the government going after one of its own citizens. The hold Putin has over Trump concerns me and I hate to see where we end up because of Putin and Trump. We might be the next place Russia tries to annex. Think about that for a second.

Have you seen any Republicans even trying to rein in Trump? Have we seen Paul Ryan even talk about anything concerning the president lately? No, of course not. He is too busy trying to fend off “IronStache” aka Randy Bryce. Good luck with that Paul Ryan. Randy Bryce is for the people. (Click here to learn more about IronStache) (Click here to tweet IronStache)

Well, I’m a bit tired and I have to make more posters for the MarchForOurLives on Saturday (LINK) and hopefully get a shirt made in time too. So forgive me for short blogs this week. I’m having a hard time keeping up with my life right now. I am taking a break tonight to spend time with my dear hubby, so there will not be a Friday blog this week. If you follow me on Twitter, you can browse through the posted pictures of Mawow! Take care and have an absolutely terrific weekend and I will see you back here on Monday.

One thought on “FROM WASHINGTON, WITH LOVE”