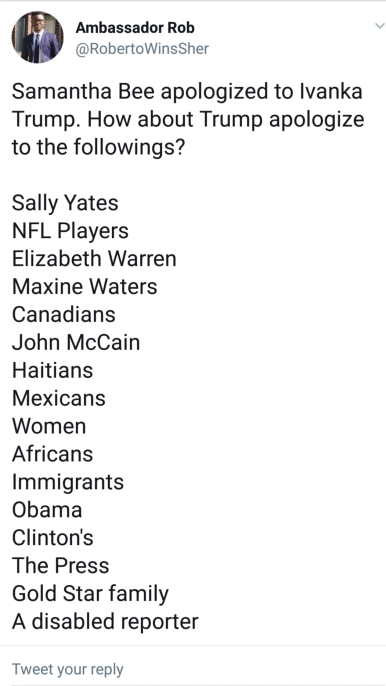 Good Morning Y’all! TGIF, right? I had something planned for today’s blog, but then I was inspired by a tweet I saw and I am grateful that @RobertoWinSher posted his tweet. He is a fellow writer, so go give him a follow over on Twitter. He is working on a book he hopes to publish next year and I know you are going to want to read his book!

So, the whole Samantha Bee controversy is being blown way out of proportion. If you have ever watched her show, you know she speaks the truth and it is completely unvarnished, which is why I like her. She speaks her mind and what she said about Ivanka Trump, in my humble opinion is the truth. Ivanka claims that she doesn’t have a job at the White House, yet she is an advisor to her father who happens to be president. She also has an office in the White House and high-level clearance. (LINK) So, if she is a daughter/advisor she needs to get off her ass and tell her father that he needs to stop separating children from their parents. Catch up on my views of Trump and his evil deed of separating children here. (LINK)

Sarah Huckabee Sanders released a statement saying, “The language used by Samantha Bee last night is vile and vicious. The collective silence by the left and its media allies is appalling. Her disgusting comments and show are not fit for broadcast, and executives at Time Warner and TBS must demonstrate that such explicit profanity about female members of this administration will not be condoned on its network.”

Even though I believe what Samantha Bee is the truth, she apologized to Ivanka in a statement stating, “I would like to sincerely apologize to Ivanka Trump and to my viewers for using an expletive on my show to describe her last night. It was inappropriate and inexcusable. I crossed a line, and I deeply regret it.”

Some people are comparing Samantha Bee to Roseanne Barr, but that is like comparing apples to oranges. Both are using their 1st Amendment rights to speak out, but when Roseanne used a racial slur calling former President Obama’s advisor, Valarie Jarrett an ape the network and Disney decided that she crossed a line canceled her show. Roseanne issued an apology but then went on to blame her medication which would probably be canceling out her apology. But, I digress. We all have 1st Amendment right, but having a job isn’t a right or there wouldn’t be unemployment in this country. Disney and ABC exercised their right to fire someone who worked for them.

Wow, I got off on a tangent there for a minute, but let’s get back to Samantha Bee issuing her apology. It makes me wonder why we are holding a comedian to a higher standard than the president? According to Fire & Fury, by Michael Wolff, (CLICK HERE TO BUY IT) Trump called Sally Yates the C word. (LINK)

And then there was the time that Trump called former Philadelphia Inquirer reporter, Jennifer Lin the C word. (LINK) Do you think he apologized to her?

Does Donald Trump apologize for anything he does? So do you think he has apologized to anyone on the list in my friend’s tweet? I don’t think so. So why is America holding Samantha Bee to a higher standard than Trump? It doesn’t make sense to me.

So, what can we do about it? I think we get our butts out to vote. Please get registered to vote if you aren’t. (LINK) Click that link to get yourself registered, please. Right now our country is being hijacked by Donald Trump. He is isolating us from our allies. Why do you think he’s doing that? I think so his buddy, Putin can screw with our democracy and I have had enough, haven’t you?

I hope you all have a great weekend. I am going to be getting ready to head to Florida next week. I am hoping to get a few blogs before I leave, but it may be hit and miss. So, if you don’t get many blogs over the next two weeks, I apologize, but I want to hang out with my bestie and edit my novel.

One thought on “APOLOGY”